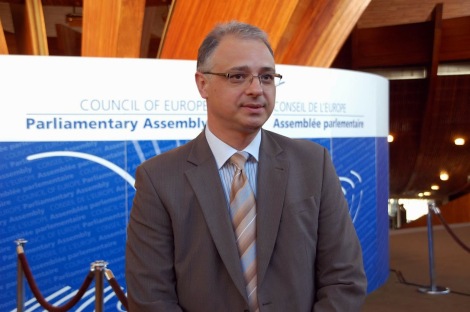 In this brief interview, I would like to discuss with you, Ukrainian Ambassador to Italy Yevhen Perelygin, your country’s ongoing crisis which engages and disconcerts the international community. I would like you to share your significant opinion in order to better comprehend the situation and also to create a common sense of friendship and belonging between our countries. Civil society, in fact, should concur in promoting such a relationship, within students, workers and world citizens. Thus, my first question is: why did Ukrainian people choose to approach Europe? Why did they withdraw from their agreements with Russia?

There are several reasons to come closer to the European Union. First of all, Ukraine belongs to the European civilization. If you see into the history of Ukraine, it has always been connected to Europe: from the very beginning, through all centuries, the Ukrainian representatives and the king’s families were associated to many families in Europe, in France, in Poland and in other countries. Historically, Ukraine belongs to Europe.

Second reason: there are some political, economic, social and cultural development systems in the world, the Western, the Asian, the Russian, etcetera. Ukraine decided to choose the European way of life for its country. What does it mean? It means that we would like to combat corruption and to build a society based on a liberal economy, the rule of law, democracy and human rights. Thus, we would like to be part of the educational European process, and this means that Ukrainian universities, Ukrainian young people, will have the possibility to exchange with European students (Erasmus program, etcetera). This is why Ukrainian people wish to realize this chance and to be an integral part of the European process.

In several regions of Ukraine there are secessionist movements. Regarding the situation in Crimea, there were signs saying “Putin is our president” and Russia threatened a military intervention, followed by its troops’ invasion of the peninsula. A referendum has taken place and 95% of voters chose separation from Ukraine. Is this secession legal? What are the main reasons that influenced so many people to prefer Moscow to Kiev? What pressures have there been from the Russian government?

This is a very complicated issue and to explain it I have to consider the history of Ukrainian and Russian relations and the existence of one country, named the “Soviet Union”. First of all, I would like to focus my attention on the referendum, which is recognized by President Putin, and not by the international community. It is a very tricky thing. It was impossible to organize this referendum in Ukraine because its legislation prohibits this kind of referendums. Russia promoted the organization of this referendum on the Ukrainian territory, it immediately recognized the electoral response and took Crimea as a part of a Russian new liberal empire.

It is true that in Crimea there are some people that chose or have chosen Putin as a president . Why? The indigenous people, tartars, Ukrainians, Bulgarians, etcetera, were expelled from Crimea by Stalin’s regime and spread to territories such as Uzbekistan. At the same time, Russians came to Crimea and this is why more than 50% of the population who lives in Crimea right now has Russian ethnic origins, 20% are Ukrainians and only 15% are tartars. In fact, only 20 years ago, with the independence of Ukraine, the Ukrainian government started a program to make indigenous people return to their birthplaces and at this moment only 1/3 of these people actually came back to Crimea.

Those who have chosen Putin as a president are not really interested in coming under Russian sovereignty, they want to be again part of the Soviet Union, where they lived for many years and where they probably felt happy. Nevertheless, they will not come back to the Soviet Union, but will be included in modern Russia, with its novel lifestyle, prohibition of manifestation, rights’ denial, etcetera.

Finally, I would like to mention and to underline that only 34% of the population took part in the referendum. They do not represent the public opinion of the entire population in Crimea. Tartars refused to participate completely and not all ethnic Russian people voted. This is why we have this situation, that degenerated with the Russian occupation of the territory with military troops.

Concerning Crimea, president Barack Obama has declared: “we will isolate Moscow.” Chancellor Angela Merkel has said: “Putin is out of reality”. A G8 without Russia took place for the Ukrainian situation. How is the international community behaving to face this crisis? How do you think it should be solved? Is it possible that other attacks will occur against Ukrainian territorial integrity?

I think that Russia didn’t expect such strong intervention, participation and action by the international community, including USA, UE and countries like Germany and the United Kingdom. It means that what they are doing is the right way to find a solution for this crisis. Of course, we are working with USA and UE to ensure Ukrainian security because once, twenty years ago, we received several guarantees from USA, UK, Russia China and France, all the nuclear powers, on this issue: our safety is under their responsibility because Ukraine withdrew all its nuclear weapons.

What happens now? There is a very dangerous development because the international legal system is under attack. This means that we have to find a new tool, a new mechanism or instrument to guarantee the sovereignty and territorial integrity of countries like Ukraine which stopped the advancement of their nuclear potential. This is a task not only for Ukraine but for the whole international community, because all of us want to live in a more secure word. This crisis showed that there is a lack in the system and we have to find an appropriate solution.

As a Ukrainian citizen, I have two diverse visions. On the one hand, I wish to see more action, more involvement from the international community. On the other, I expect more assistance to Ukraine. Why? If Ukraine demonstrates to embrace the European development in its country – with good economic and social indicators, with the possibility of visa-free travel, youth, scientists, and cultural exchange – Crimean and Russian people would see the advantages of a European development of the country and maybe will see in the coming years a different, more democratic Russia, more people-oriented and less military-constructed.

Thanking you for your time, I would like to conclude this interview by asking: what are the real needs of the Ukrainian people in this critical situation?

There are different kinds of needs. For example, economic development. We have economic difficulties because we didn’t realize comprehensive economic reforms during the last 20 years. We did something, but not enough. Why did we need these reforms? Because Ukraine had lived for 70 years under the socialist regime of the Soviet Union. Can you imagine that 22 years ago, in my country, we didn’t have private propriety? Nothing: no land, no enterprises, everything belonged to the State. This is why we started from the adoption of many basic laws and are now introducing and implementing the European system. Today is the moment in which we can finally decide if we want to follow the European track, the European way to develop our economy, without coming back to the old style and old-fashioned Soviet system. This is why we need financial assistance, and for this purpose there is a current decision of the EU to give Ukraine 11 billion euro. Not a gift, not an aid, but a special package for reforms which will be received under the programs of the International Monetary Fund, the European Bank for Reconstruction and Development, the European Investment Bank, the European Commission and other financial institutions. For example, according to estimations concerning the energy-efficiency issue, to supply buildings with hot water or to heat them during the winter (in some part of Ukraine there are 15-20 degrees under zero), we are losing 35-40% of this energy capacity because of the old-style energy system. In Europe, to produce a good you spend two times less energy than in Ukraine. That is why we need to build new industrial facilities, new kilns, etcetera. Judicial and democratic reforms are also fundamental in order to achieve, for example, independent courts and fair trials. You cannot build this system in one day or in one year. This is why we are working with the Council of Europe and the EU. All of these reforms are possible but difficult: we need a strong education system and we need to fight corruption.

Another important aspect is security. Ukraine was number three in the world on the basis of its nuclear potential, for its weapons, rockets and missiles. Although we withdrew and destroyed all nuclear parts of these missiles, we could come back and restart a nuclear program. But this would be a very irresponsible behavior because the international community is currently fighting to reduce nuclear threats. Ukraine will not restart this program and we would like to cooperate in building together a new system of guarantees, towards multilateral agreements, NATO partnerships, through other organizations’ relationships, bilateral security agreements; there are many options on the table. We are open and would like to define and realize these agreements because we don’t want to be threatened one more time by Russia or by any other country. These are urgent needs on our agenda for the next years.