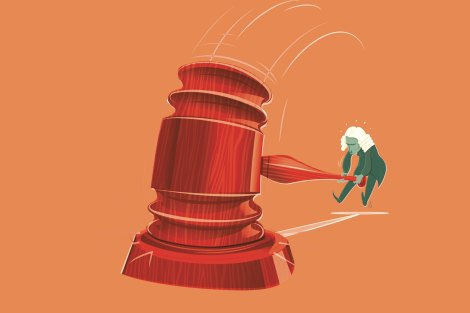 Jerome Frank is a legal realist who believes that judges do make and change laws. Frank’s thesis is that certainty in law is a legal myth. He concludes that the subjective childish need for certainty leads the “basic legal myth that the law is completely settled and defined” which then leads to the myth that judges never make the law. This denial of the existence of judicial law-making, he argues, is a myth that leads to many harms and the birth of many other “troublesome semi-myths”. He explains the harms of this myth by contrasting it to valid legal fictions and benevolent lies.

Frank introduces to the conventional view that believes judges are passive individuals who are bound by law that pre-exists their judgments and therefore only impartially apply the laws which others make. The conventionalist view believes that only legislatures can make new law. When a former decision is overruled, conventionalists believe that the earlier decision laid down an erroneous rule and the judges are seen as correcting rather than altering the law.

We can see an example of this when we look at the Rodriguez v. British Columbia and Carter v. Canada cases. Rodriguez v. British Columbia was a case about the right to assisted suicide; in this case, it was found that there was no right to assisted suicide and section 241(b) should be upheld. However, this decision has since been overturned by Carter v. Canada. When looking at the Carter decision it would be seen as rectifying a mistake in the law. The prior decision reached in Rodriguez was wrong and the new Carter decision is the actual law. In this view, adjudication is mechanical, logical, and involves deductive reasoning.
Frank rejects this conventional view that law is a complete body of rules existing from time immemorial and unchangeable except through the legislature. Frank does not believe that adjudication is logical or deductive. Instead, Frank believes that there is no law that pre-exists the judgment of judges, judges have the ability to make and change laws, and judges are not impartial. Frank believes that statutes and other sources of law are not law until courts say they are law; one cannot know what a statute requires until courts interpret and apply it to facts in a case.

Frank goes on to state that no lawyer would in this day pretend that the decisions of the courts do not add to and alter the law.

“What [then] explains this false belief that the judiciary does not ever change the law or that, when it does, it is acting improperly? Why do the courts customarily deny that they have any law-making power and describe new law which they create to deal with essentially contemporary events, as mere explanations or interpretations of law which already exists and has existed from time immemorial?”

Frank believes that “the essence of the basic legal myth or illusion is that law can be entirely predictable” and he believes that behind this myth lies a “childish desire to have a fixed father-controlled universe, free of chance and error due to human fallibility”.

He then goes on to explain absolute certainty and predictability as it relates to statutory legislation and judicial law making.

a. Statutory Legislation
Frank explains that statutory legislation, while it may alter the law, it usually does so only prospectively. This provides certainty and predictability in the law because people will know the law before they act and “can conduct themselves in reliance upon the existing law, knowing, at the time [they] act, that any changes thereafter made by the legislative body will not modify the law upon which [they] relied”. Absolute certainty and predictability are not endangered by alterations.

b. Judicial Law-making
This is not the same for judicial law-making. “A judge in the course of deciding a case, can for the first time create the law applicable to that case, or can alter the rules which were supposed to exist before the case was decided, this means that the rights and obligations of the parties to that case may be decided retroactively”. If judges are making law, absolute certainty and legal predictability are impossible.

Frank suggests that the powerful, “subjective need” for stability and legal predictability in “a child’s world” is what leads to the denial that such judicial law-making exists, which, in actuality, is a myth. He states that the “supposed practical importance of avoiding legal retroactivity and uncertainty is much overrated, since most men act without regard to the legal consequences of their conduct, and, therefore, do not act in reliance upon any given pre-existing law”.

Examples of this are when one:
● Marries,
● Enters into a partnership,
● Buys a piece of land,
● Engages in any other transactions

In these situations Frank quotes John Chipman Gray to say that that the individual “has the vaguest possible idea of the law governing the situation”. He believes that the law which a man has no knowledge of is the same to him as if it did not exist and the factor of uncertainty in law has little bearing on practical affairs.

As such, the individual is actually not disadvantaged by the lack of legal stability from judicial law-making (even though the individual denies the existence of judicial law-making due to a childish desire for stability). Frank states that: “[t]he no judge-made law doctrine, it seems, is not, fundamentally, a response to practical needs. It appears rather to be due to a hunger and a craving for a non-existent and unattainable legal finality – which, in turn, may be ascribed to a concealed but potent striving to recapture in the law the child’s conception of the fatherly attributes”.

However, in common, everyday situations like purchasing items from a store, signing a cell-phone contract, or driving a vehicle, the individual would most likely not seek out the law governing that situation and therefore, would not be disadvantaged by the instability.

Frank defines fiction as a false affirmation made with knowledge of its falsity but with no intention of deceiving others because they are known by all as being contrary to fact. He notes that the denial of judicial law-making is a falsity meant to deceive laypeople, and as such its falsity is not known to all. As such, this denial is not a fiction.

He defines a lie as an affirmation of a fact contrary to the truth, made with knowledge of its falsity and with the intention of deceiving others. He notes that benevolent lies are designed by professionals to deceive laypeople for their own good, and, by later illustrating the harms of denying judicial law-making’s existence and how professionals deceive themselves into believing this falsity, shows that this denial is not a benevolent lie.

Frank goes onto to define a myth as a false affirmation made without complete knowledge of its falsity, and argues that the denial of the existence of judicial law-making is just that. Frank believes that this myth involves self-deception by judges and lawyers, noting that “when judges and lawyers announce that judges can never validly make law, they are not engaged in fooling the public; they have successfully fooled themselves”.

While the (correct) use of a legal fiction involves constantly recognizing its false character, a myth does not do such and as a result is greatly harmful. Semi-myths have improperly been called legal fictions which has created confusion within the profession, and as such Frank explains how to distinguish the two. In using legal fictions, A is treated “as if” it were B. This can be a useful tool in the law, for instance when treating a corporation as if it were a real citizen in certain circumstances. However, in semi-myths, it is not said that we are to treat A for certain purposes “as if” it were B, but rather it is “said and believed, incorrectly, that A is B” [emphasis in original].

Therefore, a valid legal fiction can advance thinking, but when it becomes a myth or semi-myth, its artificiality becomes overlooked and this self-delusion  leads to many harms. He notes that, in the case of the denial of the existence of judicial law-making, this myth hampers the thinking processes of judges and leads them to use evasive phrases to hide from themselves and from laypeople that the judiciary actually does change old legal rules. This makes clear legal thinking difficult.

Frank notes that many legal critics have denounced all legal fictions as evil because they are used without complete knowledge of their artificiality and falsity. For instance, he quotes from Jeremiah Smith, who stated that )[t]he use of fictions… tends not only to impair, in a general way, reverence for truth; but also to diminish the respect which would otherwise be felt for the courts and for the law itself…. We believe that, at the present day, the use of fictions in law should be entirely abandoned. … If a fiction does not, in any degree or to any extent, represent a legal truth, then it continued use can result only in evil”.

Frank believes that these strong words, by legal critics like Smith, are too sweeping and we cannot afford to do away with fictional contrivances and sometimes there is a place for valid fictions. He says that the problem is when valid legal fictions turn into myths or semi-myths, which occurs “when the partial, metaphorical, artificial character of the fiction is overlooked”. As such, he concludes that the myth that judges do not make the law is harmful and unnecessarily muddles up the thinking of judges and lawyers, noting that this myth denies the “essential function of the law” and leads to the law being “made by men befuddled by myths and only partially aware of what they are doing”.